These cookies are packed full of nutrients and healthy fats and free from refined sugar and gluten. The main ingredient is almonds. Almonds contain lots of healthy fats, fiber, protein, magnesium and vitamin E. The health benefits of almonds include lower blood sugar levels, reduced blood pressure and lower cholesterol levels. They can also reduce hunger and promote weight loss. So leave these out for Santa but feel free to indulge too! 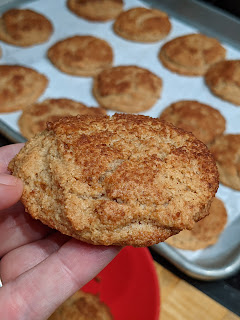 Preheat oven to 350 degrees.
Line a baking sheet with parchment paper.
In the bowl of a stand mixer, mix together the coconut oil and maple syrup
Add the vanilla and eggs, mixing until well incorporated. Mix in the baking soda, salt and cinnamon. Add the almond flour, 1 cup at a time, beating well after each addition.

Mix together the remaining sugar and cinnamon together in a bowl or shallow dish. Roll the cookie dough into 1 1/2 tablespoon rounds, then roll to coat in the sugar mixture. Drop the coated dough onto the parchment paper-lined baking sheet, about 3 inches apart.
Bake 11-13 minutes, or until golden brown around edges. Allow to cool for a couple of minutes on the baking sheet, then transfer to a wire rack to finish cooling. Enjoy!
at December 23, 2020 No comments: 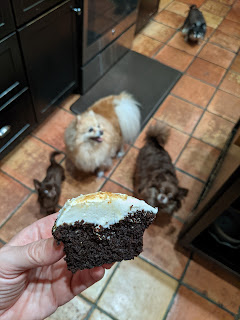 I love working with Buckwheat. It is SO nutritious. Most get confused when they hear the name and think it has Gluten, so they steer clear. Let me enlighten you!! Buckwheat belongs to a group of foods commonly called pseudocereals. Pseudocereals are seeds that are consumed as cereal grains but don't grow on grasses. Other common pseudocereals include quinoa and amaranth.
Despite its name, buckwheat is not related to wheat and is thus gluten-free. Buckwheat is one of the healthiest, nuttiest, most versatile Pseudocereals . It has more protein than rice, wheat, millet or corn and is high in the essential amino acids lysine and arginine, in which major cereal crops are deficient. Its unique amino acid profile gives buckwheat the power to boost the protein value of beans and cereal grains eaten the same day.
Raw buckwheat flour (ground groats) is more absorbent than wheat flour and is used in recipes for pancakes, blini, and pasta such as Japanese soba noodles.  Buckwheat flour contains four times as much fiber as whole wheat flour, and is also a very good source of manganese and magnesium. I like to make sweet breads with it. Tis' the season so here is some healthy gingerbread. You can make loaves out of it too if you prefer. I like muffins for easy serving. I topped with Vegan Sugar-Free Whipped Cream and a dash of cinnamon.
Healthy gingerbread banana muffins


Pre-heat your oven to 350 degrees F.
Prepare your muffin pan.
Beat the coconut oil, vanilla and sweetener of choice until fully incorporated.
Beat in the eggs until combined.
Mix in the banana and molasses until completely combined.
In a separate bowl, whisk together the dry ingredients.
Mix the dry ingredients into the wet mixture until completely mixed in.
Let sit for 15 minutes and then stir again to let the coconut flour absorb.
Fill your muffin pan filling each hole to the top.
Bake for 20--30 minutes, until a toothpick inserted comes out clean.
Remove and cool for 10-15 minutes, then remove from the pans onto a wire rack and cool completely.
I topped with Vegan Sugar-Free Whipped Cream.
at December 23, 2020 No comments: 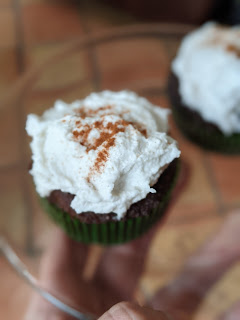 I use this in coffee drinks, desserts, or just as a dip for my fruit. SO stupid easy!
Raw Vegan Whipped Cream

Place your can of coconut milk in the fridge overnight upside down. Next day, turn the can right side up and carefully open the can. Strain out all the watery liquid, leaving the solids.  Mix your solids with stevia and vanilla. Whip up and serve.
at December 22, 2020 No comments: