Cooking for my 2 Carnivore men is difficult right now, only because I like cooking what I eat, and I don't eat meat. Lately I find I am making 2 meals. Tonight I am doing burgers. For the men, Ground sirloin, Salt, Pepper. For us, it gets a little more time consuming... Veggie Burgers. For the Veggie Burgers I used: 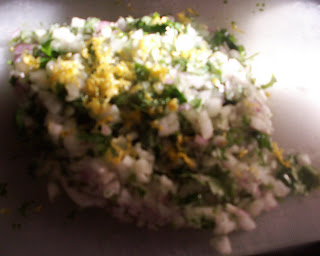 Combine the garbanzos, eggs, and salt in a food processor. Puree until the mixture is the consistency of a very thick, slightly chunky hummus. Pour into a mixing bowl and stir in the cilantro, onion, yellow pepper and zest. 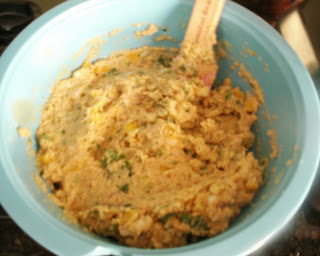 Add the breadcrumbs, stir, and let sit for a couple of minutes so the crumbs can absorb some of the moisture. At this point, you should have a moist mixture that you can easily form into 1 1/2-inch-thick patties. 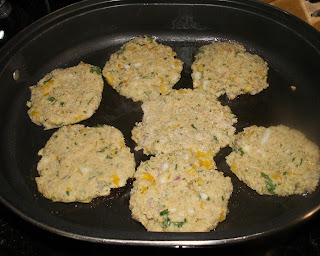 Heat the oil in a heavy skillet over medium low, add patties, cover, and cook for 7 to 10 minutes, until the bottoms begin to brown. Turn up the heat if there is no browning after 10 minutes. Flip the patties and cook the second side for 7 minutes, or until golden. 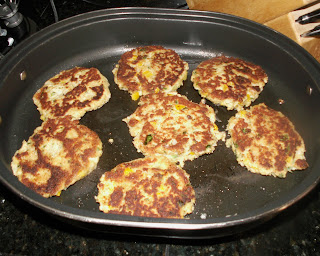 Serve immediately. I put mine on a bun with tomato, lettuce, mayo, mustard and ketchup. Taylor likes hers with cucumber, avacado, tomato and lettuce and she puts Cheese fantastico light dressing. 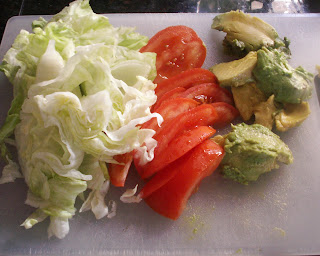 The boys: Meat, Bun, Lettuce, Tomato and barbeque sauce. no brainer
at September 23, 2010 No comments:

Email ThisBlogThis!Share to TwitterShare to FacebookShare to Pinterest
Labels: vegetarian

When we were in Las Vegas this past week, we ate twice at one of my favorite Chef's restaurants. RM Seafood... owned by Rick Moonen. Everything was so wonderful.  My absolute favorite was his Escabeche, but I don't have that recipe yet. I ordered his cookbook, and I can't wait for it to get here. My second favorite was his light and tasty cucumber salad. I am reposting the recipe here, as he has it available online.
Cucumber Salad 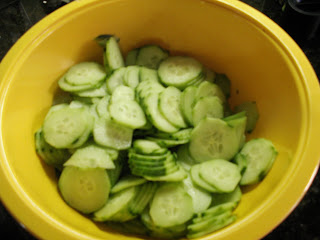 Whisk together the vinegar, lime juice, fish sauce, oil, and sugar until the sugar dissolves. Add the onion, garlic, cucumber, carrots, and radicchio, and toss together. Stir in the mint.

When he says thinly sliced...he means THIN. That is what I loved about this salad. 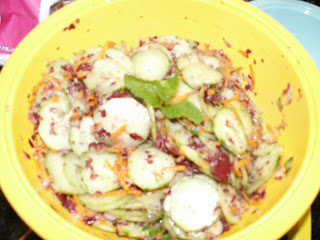 Keeping in the theme of my quick easy meals, here is another salad I make for me and Taylor. Vegetarian and yummy.
1 can pitted and sliced black olives
10 fresh basil leaves. We grow ours but you can omit them if you don't have fresh ones.
2 red peppers diced
1 bernsteins LIGHT cheese fantastico salad dressing
1 cup parmesan cheese
1/2 cup feta cheese
1 package miniature farfalle.. or what others call bowtie pasta

cook pasta according to directions. Mix up olives, peppers, basil and dressing, cheeses in a large bowl. Once pasta is drained and cooled, pour sauce and stir. Chill and serve. This is one of Taylor's favorite school lunches. It is great to keep handy in the fridge. 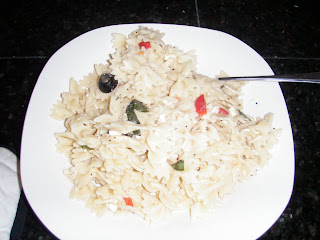 I have been cramming in work this week to get ready for one of the biggest Pet Industry shows of 2010. It is in Las Vegas. I know... everyone thinks Vegas is all play, but for me, most the trip is all work. It takes a lot of prep for these shows, so my cooking is limited to easier dishes during this time. Tonight I made Rigatoni and Cheese

Directions
1. Bring a large pot of lightly salted water to a boil. Add pasta and cook according to package directions, yes I did use pre-packaged rigatoni cuz I am pressed for time this week. Mine needed to be cooked for 11 minutes. Drain and reserve.
2. In a large sauce pan, melt 4 tablespoons butter or margarine over medium heat. Add flour and some ground black pepper to taste; stirring until bubbly. Add cream to mixture and stir continually until mixture starts to thicken and bubble; 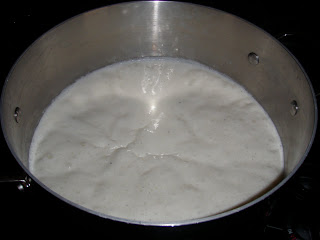 slowly stir in cheese 1/2 cup at a time until all cheese is melted.
3. Preheat oven to 350 degrees F (175 degrees C).
4. Mix parmesan cheese and bread crumbs in a dish
5. Pour cheese mixture over rigatoni. Mix well and pour into a lightly greased 9x13 inch baking dish. 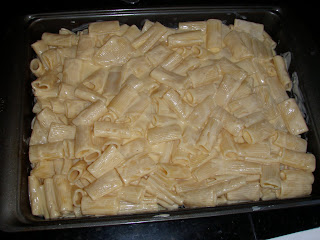 Place bread crumb and parmesan cheese mixture on top of rigatoni mixture and season with salt and pepper to taste. Cut up 4 tablespoons butter and dot all over pasta. 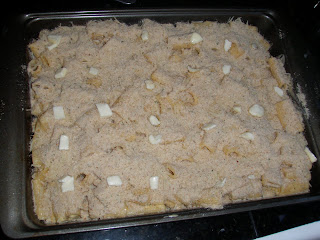 Bake in preheated oven for 25 to 30 minutes or until bubbly and golden brown. Serve.
at September 09, 2010 No comments:

Me and my daughter have been eating a lot of hummus lately. I am always irritated at how much the health food stores charge for a tiny package of hummus. So, I am now making my own. My favorite is the garlic rosemary italian hummus. It is so easy to make and a fraction of the cost. Takes about 5 minutes and anyone can do it if you have a blender.
1 (15 to 18-ounce) can garbonzo beans, rinsed and drained
3 tablespoons sesame tahini paste
You can find it in the Kosher isle... don't ask me why. Here is what it looks like: 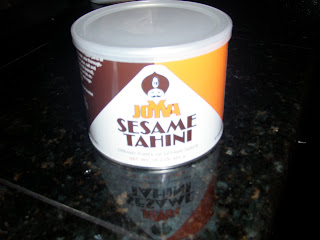 Put it all in a blender and blend until smooth.
tada! Easy and yummy. I love to put it on pita bread. Add tomatoes and cucumbers to make a sandwich and it is extra tasty. It is also a great dip for a party.
at September 09, 2010 No comments:

Tonight is Rosh Hashanah I am not Jewish but I love Jewish desserts!

Tonight I am making a traditional Jewish dessert that is served on Rosh Hashanah. We are not a Jewish family. We are Christians, but I love to explore the culinary traditions of other religions and cultures.  I am making traditional honey cake. 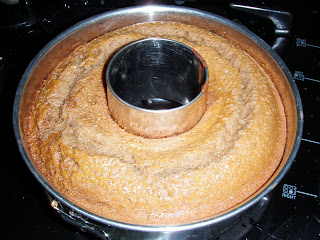 Flip the cake over once cool and add the frosting 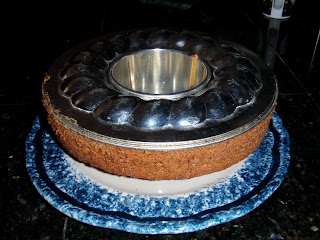 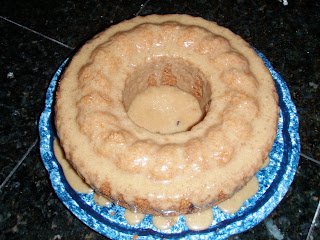 On my healthy kick, this is a nice easy refreshing salad with a twist.

Great for a snack or a pre-meal salad/appetizer 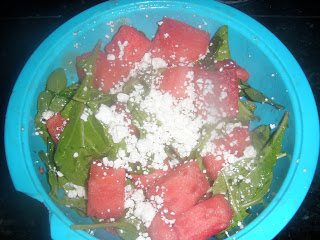 I am back! Yep, I took most the summer off. Not from cooking, but from blogging. I cooked up a storm, it was just impossible to post and play with company. So what has happened since then? Well I am still vegetarian. I have not had any meat at all and it has opened an entire world of cooking possiblities to me. I do always make a meat for my family, I just learn to tweak a vegetarian option for me and my daughter, who also stopped eating meat. I don't miss it at all. I still eat fish, so it clarifies me as a pescetarian. So you will see both meat and non meat recipes on here now. Tonight... empanadas!

Directions
In a large bowl, combine the flour with the lard, butter, and salt. Mix lightly with your fingertips until the dough forms grapesized pieces. You should still be able to see streaks of fat. Stir in the water. Lightly knead, handling the dough as little as possible, until the dough forms a ball. Add a little more water if needed. Refrigerate for at least 1 hour, then remove and let it return to room temperature, about 1 hour, before rolling. The dough can be frozen for as long as a week. Pinch off about half the dough. Roll out, on a floured surface, to a thickness of 1/8inch. Cut out 3inch circles. Then, gather the scraps, add to the rest of the dough, and roll out another batch of circles. Repeat, with the rest of the scraps. This should be enough dough for about 24 empanadas. 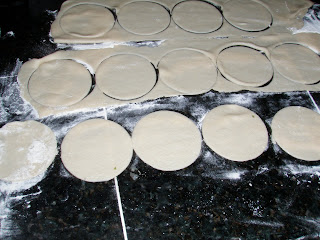 directions
Heat the oven to 375°F. Beat the egg and water in a small bowl with a fork or whisk.
over medium-high heat stir in the olive oil, diced red pepper, salt, onions and garlic and cook until tender. 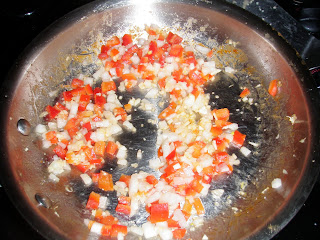 Stir in the cumin, chili powder and crushed red pepper, black beans, . Reduce the heat to low. Add shredded cheddar cheese.. Remove the skillet from the heat. Stir in the cheese, 1 cup beans and the cilantro. Let the mixture cool to room temperature.

Spoon filling mixture on half of each pastry circle. Brush the edges of the pastry with water.
Fold the pastry over the filling and crimp with a fork to seal. Place the filled pastries onto baking sheets. Brush the pastries with egg . 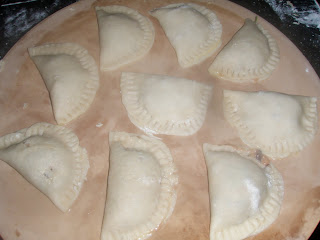 FOR CHICKEN VERSION... I started with chicken, olive oil and salt and added half of the above vegetarian mixture. roll and cook the same.

Bake for 20 minutes or until the pastries are golden brown. Remove the pastries from the baking sheets and let cool on wire racks for 10 minutes. Serve the pastries with the sour cream, guacamole and beans. 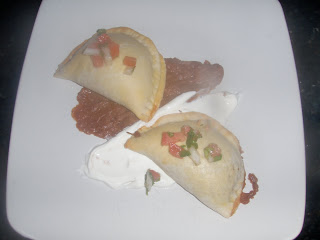