Time for me to get back up on my soapbox for just a second. Many of you know I took place in my first ever march. I am not an activist. I have never attended any sort of political march before. After reading, watching documentaries, doing my homework, I got on the Non-GMO project hard core.

On May 25, 2013 at 2pm est, this Global rally was in 51 countries and over 2 million people stood in March Against Monsanto. 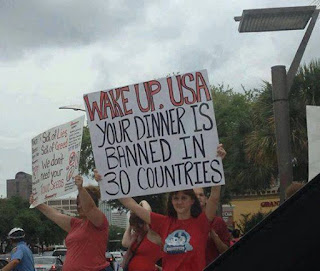 For those skeptics out there... Here are just a few fun facts to chew on.

Monsanto’s GMO products distort nature’s foods in ways that can now rewire your body and have been shown in animal tests to cause sterility, illness and death.

65 Health Risks of GM Food – Evidence of Reactions in Animals and Humans, Institute for Responsible Technology

GMO Foods Cause Tumors and Early Death According to New Studies, Examiner.com

In the U.S., GMOs can be snuck into our bodies because they don’t yet have to be labeled.

Under the new “Monsanto Protection Act” GMO crops can be planted and grown without courts stopping them, even if there is evidence of danger (see Section 735 of H.R. 933), until an Environmental Impact Statement (EIS) is prepared — which can take years.

The Monsanto “rider” (Section 735) was snuck into a 240-page government funding bill and was hidden so most politicians, who rarely read the actual bills, probably did not even know it was there.

To date, no one in Congress claims ownership of Section 735, though speculation is emerging that Roy Blunt, a Senator from Missouri, is responsible. Blunt has serious financial ties to Monsanto. Monsanto’s home state is Missouri.

In Europe, which has mostly banned GMOs, the tide turned when people actually took to the fields to destroy the crops that were destroying their farms and their lives. We need to ask ourselves where self-defense starts when toxins are being snuck and forced into our bodies through the food, water, air and “laws.”

Learn more about GMOs, and what you can do to stop them.

Follow the money behind GMOs, the Rockefeller’s, and government ties with Monsanto.

Even the birds and squirrels are smart enough to know not to eat GMO: 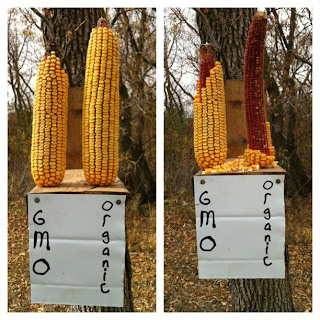 I am writing this today because Hollywood is now getting on board and trying to put into production production on our Science-Fiction(Faction) film about the danger of GMO and its consequences in the future, done in the spirit of "Blade Runner," "Terminator" and "Soylent Green," with a hint of "Schindler's List."
Their hope? To get out the word about the dangers of modified food. How it is killing people left and right. Communities being wiped out.
Here is their kickstarter campaign: http://www.kickstarter.com/projects/1097288006/santo-71315?ref=live
HELP THEM! Spread the word. Sponsor. Do what you can. Please share on twitter, facebook, pinterest... anywhere. Let's educate our kids to prevent this.
READ ABOUT THEIR GOAL
Nothing catches peoples attention more than a movie.  I am a backer and I hope those of you that care about our futures will too.
Donate here!
Thank you!