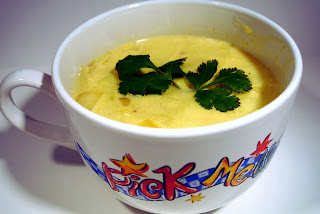 It is a Seinfeld kinda night. No Soup For You!!! This soup was made famous by the Soup Nazi Episode on Seinfeld. I recently have started playing the series at night when Randy is snoring away. I love watching Seinfeld reruns. So corny that it is funny. I like having a little background noise while I am writing and cooking. So the famous soup Nazi episode came on tonight so..
SOUP FOR YOU!! I had to look into the scene that made the soup Nazi a legend.
Kramer: A hot bowl of mulligatawny would hit the spot.Elaine: Mulligatawny?Kramer: Yes, it's a delightful Hindu concoction simmered to perfection by one of the great soup artisans in the modern era.Elaine: Who, the Soup Nazi?Kramer: He's not a Nazi, Elaine. He just happens to be a little eccentric. Most geniuses are. - from Seinfeld

I found out that this soup is one of the many things the British took home with them after their occupation of Inday. Mulligatawny literally translated means pepper water. It has many variations. Here is the one I used. I had never had it before and now it is one of my most favorite soups. Adapted from: The Pioneer Woman.
1 whole Boneless Skinless Chicken Breast, Cut Into Bite-Sized Pieces
Salt And Fresh Black Pepper
4 Tablespoons Butter
1 whole Medium Sweet Onion
4 cloves Garlic, Minced
1/4 cup gluten free All-purpose Flour
1 Tablespoon Curry Powder
4 cups Chicken Broth
1 cup Half-and-half
1 cup whole milk
2 whole Granny Smith Apples, Peeled And Diced
1 Tablespoon Sugar
2 teaspoons Salt
Freshly Ground Black Pepper
Cayenne Pepper (optional)

In the same pot, add butter and reduce heat to medium. Add diced onion and garlic and stir to cook. Cook until Onions just start to brown.

Sprinkle flour over onions. Stir to combine, then stir in curry powder. Cook mixture over medium heat for one minute, stirring constantly.

Add chicken and diced apple and cook for another 5 to 10 minutes. Turn off and allow to stand 5 or 10 minutes before serving.
I sprinkled a little bit of cayenne pepper and cilantro on top. 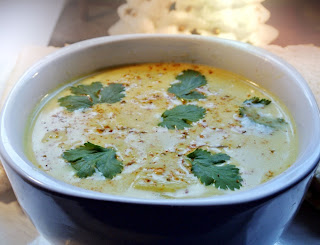