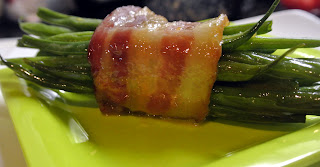 Bacon Wrapped Green Beans
Maybe I am the only one with this problem. You are almost done cooking dinner when your son walks in with 4 more teenagers... hungry teenagers. This was my scenario today. It is my scenario almost every day. It wasn't so bad. 8 for dinner when I had planned on 4. With a deep sigh I turned around and peeled more potatoes, trimmed more chicken, and rolled more green beans. Some days I am happy to do it, other days not so much. This was a not so much day, but I just smiled and made conversation while I did my chores. In the end everyone was happy and I was thrilled that one of my sons friends actually ate his green beans! Most my son's friends don't like veggies. Granted I had to wrap them in bacon and put a sweet conconction on them. But still, eating veggies is eating veggies. So I am happy. My daughter actually put this on her facebook page: "who could have known... bacon wrapped green beans = flavorgasim for dayyyyyyssssssss". So it was a success.

Bring a pot of water to a boil. Add grean beans for 2 minutes. Drain and set aside. 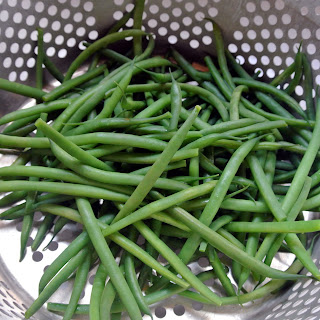 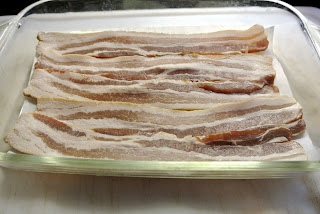 Spread out strips of bacon and broil them for 10 minutes. Cut each piece of bacon in half.
In a baking pan lay one of the ‘half’ pieces of bacon and place several beans then wrap the bacon around the bundle of beans and secure with a toothpick. continue doing this until the beans are gone. 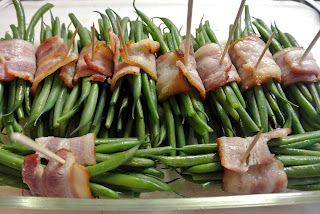 Melt the 3 tsp of butter in small sauce pan. add brown sugar, garlic salt and soy sauce and mix continuously over med-high heat. once completely blended, brush over the bundles with a ‘cooking’ brush until mixture is gone. 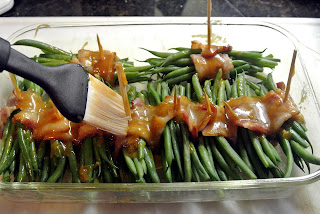 I served mine with Chicken Piccata and Garlic Parmesan Mashed Potatoes. 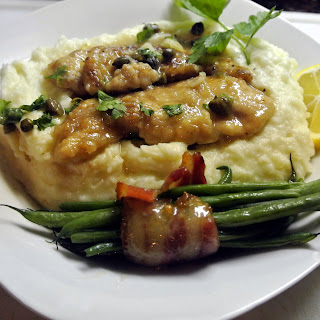