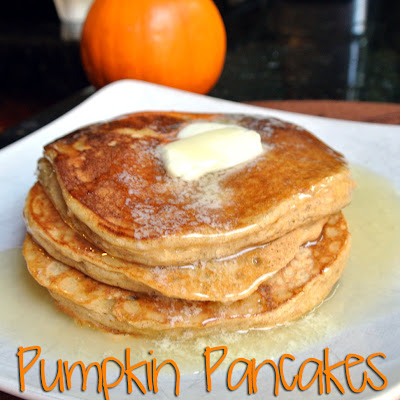 If you follow me on facebook, you already know about the accidental gluten exposure my daughter went through. If you don't, let me give you a quick rundown...She was at a party. My daughter is turning 20 and a lot of her friends are over 21 and drink. She got busy talking away and reached for her lemonade and took a big swig, only to spit it all over, because it wasn't her lemonade... it was someone's beer. Evidently that was enough to send her into a tailspin. Course as you all know it didn't happen immediately. The next day the hell began. Now, I know it is torture for her, so I try really hard to stay understanding. Sometimes it is really tough to get caught in the crossfire though. My daughter is the sweetest thing on a normal occasion. Once gluten crosses her lips she can be very brutal. She explains it that she can't control it. Everyone ticks her off and she doesn't hold back what she is thinking. Jokes are no longer funny. There are tears, a lot of tears. Emotional roller coaster is an understatement. I am told gluten affects every Celiac in different ways. She does get the regular tummy pain, headaches, fainting, hard to breathe. For her though, I think it is the emotional/mental game gluten plays on her that is the hardest. Poor thing. I told her we are going to go to the store and get her a bunch of travel cups to take so that she knows which one is hers at all times. She tries to eat at home as much as possible. If I had it my way she would never eat outside the home. Pack lunches, and drinks etc. It just isn't worth it. She is coming around to my way of thinking. She just can't handle this anymore, and if I am being honest... neither can I!

Knowing she had this awful exposure. I wanted to ease her pain a little bit and make her a nice breakfast to get her day off to a good start. Thankfully, she loved these. She ate 5 of them! 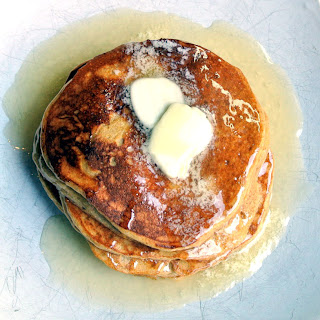 For the syrup:  Stir all ingredients together in a small saucepan. Over medium heat, stir occasionally until boiling. Let it boil for a few minutes while stirring until it thickens. Remove from heat and set aside.

In a bowl, mix together the milk, pumpkin, egg, oil and vinegar.

Mix the dry ingredients into the pumpkin mixture just enough to combine.

Heat a lightly oiled griddle or frying pan over medium high heat. Pour or scoop the batter onto the griddle, using approximately 1/4 cup for each pancake. Brown on both sides and serve hot. 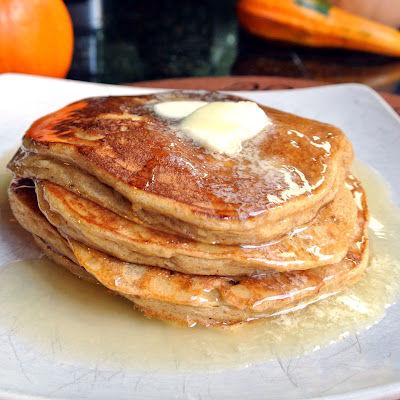