In Memory Of Don Francis

I am bringing you a recipe re-post today. Last night we lost a dear friend. He was taken before his time. Liver Cancer took his life on March 6th 2013. Don Francis was an amazing Father, Husband, and Friend. He also was an amazing Chef and Writer. He was so much more than that too. This world lost a great man.
He gave me his recipe for his famous Caesar Salad September 29th 2011. So I wanted to re-post it again in it's original format. Because it was posted when he was alive and kickin'. Thanks again Don, not just for the recipe, but for everything you did for everyone.
We love and miss you! 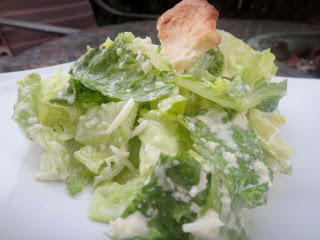 I have been making Caesar Salad for years, but it has never been "the best". Back where we come from, there is a little house on Kathy street that is filled with love, laughter and good food. Back there we show up at Mommy and Daddy's house. Daddy (Don) makes the world's best Caesar dressing that I have ever had. I want to thank him for being so kind to share his Caesar recipe with me and for saying it was ok to put up on my blog. His wife ("Mommy") makes the world's best croutons. But we can't have those. Taylor's wheat allergy won't allow it. So I just toasted up a few of my homemade pita breads and ripped them into pieces and topped the salad with them. I think next time I am going to make some parmesan cheese chips to garnish.  Here is Daddy's recipe: 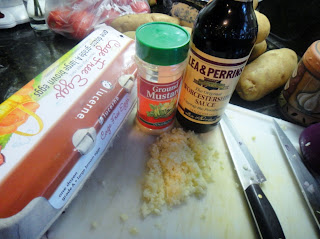 1 coddled egg (dropped into super hot water for about 15 seconds to basically sanitize)
3/4 cup of finely grated parmesan (or even romano for sweeter style)
1/2 cup of olive oil.

add these to above ingredients in bowl and whisk and add salt to taste. 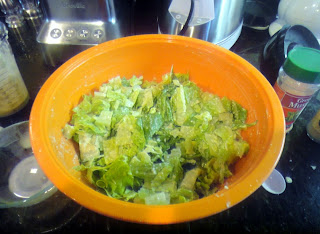 I chopped up 5 hearts of Romaine lettuce. Which would probably equal 2 large heads of Romaine chopped. Toss together and serve!
Follow Us: