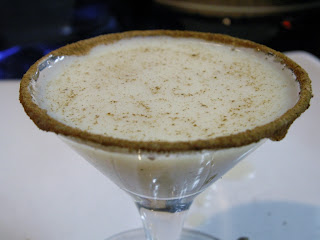 Operation forgive my neighbor isn't going so well. Not yet. The lady is having a party in her backyard right now and the urge to throw water balloons over the fence is pretty strong. Since Revenge is best served cold. I am making a COLD Toddy. An Egg Nog Martini. This is simple to make. If you don't have egg nog already at home, simply make some. You can find the recipe here. Cheers to the weekend.
1 part Egg Nog
1 part Captain Morgan Spiced Rum
1 part Vodka
1 part whipped cream vodka
Ice
1 tsp. cinnamon
1 tsp. nutmeg


Mix together the nutmeg and cinnamon. Dip the the rim of the martini glass in a bit of vodka, then place the glass rim into the cinnamon and nutmeg mixture until the rim is coated.
In a shaker mix together egg nog, Spiced Rum, Vodka, Whipped Cream Vodka and Ice. Shake it up and pour in prepared glass.