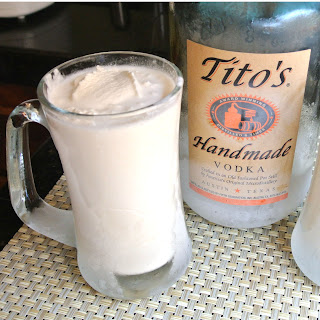 Gluten In Alcohol!?!?!
Here is the deal: In the old days, vodka was made with potatoes, which is great for Celiac Disease sufferers, but these days, most vodka is made from grain... like wheat. That is a NO NO! I am constantly hearing about people ending up suffering and they cannot figure out why. So I ask them to list what they had recently. More often than not, a ladies night with a cocktail or two and they are down and out. Please remember folks: Anything made from wheat, barley, or rye is NOT gluten free. These are most beers and many alcohols! So today I am introducing Tito's Vodka. Distilled six times, very tasty, best vodka I have had. 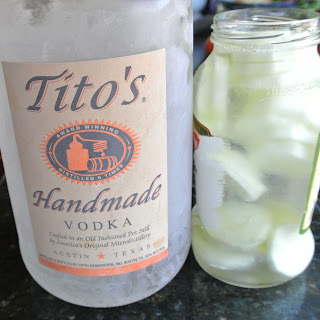 Now, I am not a big specialist or anything. This Vodka adapts to any flavor. A friend and I were out at a beverage store in Southern California and there was a "Vodka Specialist" there that day. I did not even know there was such a thing. So I asked her: "So what do you think is a great Vodka? Grey Goose?" I asked.
She scoffed at me and said that the French should stop making Vodka. Her choice: "Tito's, best Vodka around here."
Sold. She told us that you can make Tito's any flavor at home, we followed directions and added peeled cucumbers to a jar along with the vodka. We froze it for 2 weeks and tada!
Cucumber Vodka without all the syrups and sugars added. Tastes amazing!

If you ever want a good story about how a business began, you should read theirs Here.

So now I am going to give you an even better recipe using their vodka. It is hotter than Hades outside. So today I am giving you a straight up, no shortcuts, perfect pitcher of Citrus SoCal Shake. 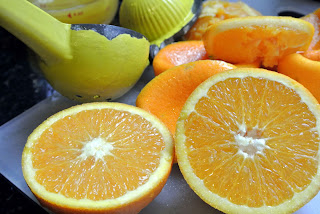 Whisk the sugar in the orange juice until dissolved and then add all other ingredients. Then pour in your ice cream maker and mix for 10 minutes. 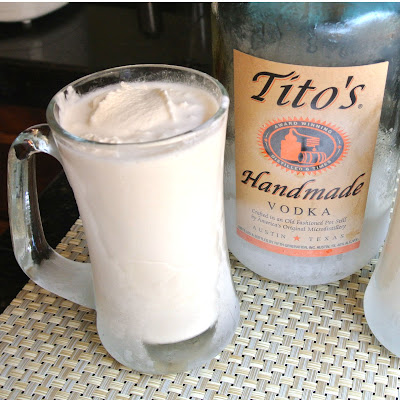 Now you have the most tasty adult milkshake their is. Enjoy!Follow Us!