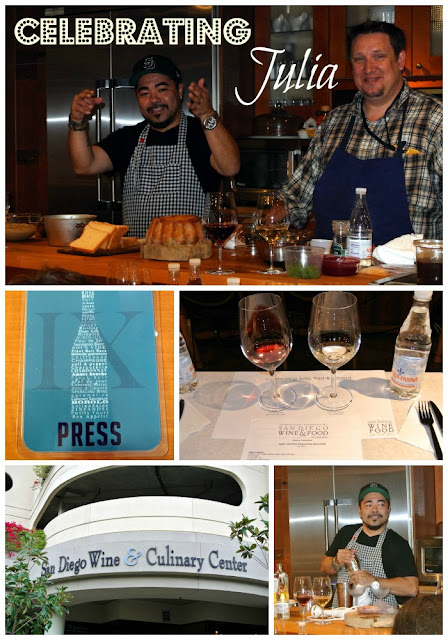 I was so blessed to be able to attend Celebrating Julia Child: Past & Present
Inspired French Dishes with a Modern Twist Featuring Celebrated Chefs RJ Cooper and Katsuya Fukushima.
Another beautiful day in San Diego!
It was Julia's 100th birthday, so it was time to celebrate French cuisine and the life of Julia Child. Chef Katsuya and Chef RJ showcased a "then and now" French celebration. Working off classic French recipes inspired by Julia Child they put a modern twist on the same dish. We watched as the two chefs prepared dishes in two completely different techniques, while sharing tips and tricks on how to modernize any dish.
For those of you that don't know Chef Katsuya and Chef RJ Cooper, Let me give you a few fun facts about each chef.
Chef Katsuya Fukushima has made two appearances on Food Network’s “Iron Chef America,” and can boast two wins under his belt. In his first appearance, Iron Chef Battle Goat vs. Iron Chef Bobby Flay. Iron Chef Bobby Flay was defeated, giving Chef Katsuya his first victory in kitchen stadium. His second appearance in Kitchen stadium Iron Chef Battle Mahi Mahi against Chef Jose Garces, he once again defeated the iron chef. Handing Garces his first ever defeat. Chef Katsuya has several successful restaurants as well.

Chef RJ Cooper also was on the iron chef, but was defeated by Iron Chef Forgione in battle bell pepper. It was Iron Chef Forgione's first ever battle as an iron chef though, so Chef Cooper went into it knowing he was headed for a defeat. No iron chef has ever lost their first battle. Chef Cooper has had some victories though. He is the owner of Rogue 24 in Washington DC. Rogue 24 is an interactive culinary experience where the kitchen is at center stage and diners experience a progression of either 4, 16, or 24 courses created by James Beard Foundation award winning Chef RJ Cooper.

There is so much more to tell about the two amazing, accomplished chefs, but I want to move on and tell you about this fun event. It was held at the San Diego Wine and Culinary Center. 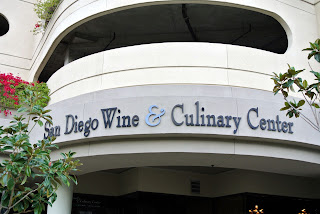 While waiting outside for the class to open, several people were enjoying wine already. 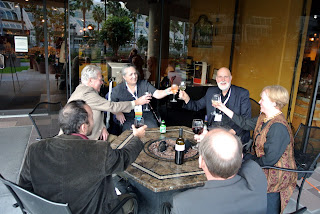 Everyone had their own place setting with French Wines that Julia would approve of. Les Hospices, Sancerre Rouge, and Clos de Nouys, Vouvray Sec. Both were delicious! 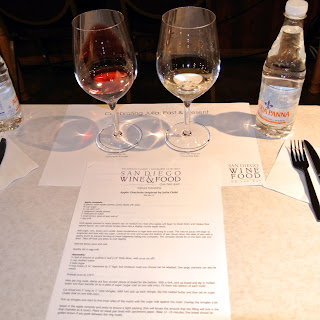 They provided us with both Julia's recipes, and their modern twist recipes of the same dish.
Chef Katsuya started off the event making Julia Childs favorite cocktail called the Reverse Martini. 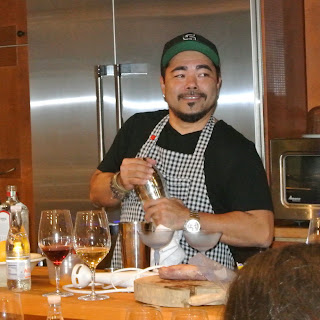 Martini's are traditionally made with 3 parts gin and 1 part vermouth. Julia liked hers with 3 parts Vermouth and 1 part gin. She said this allowed her to have 2 of them before dinner. 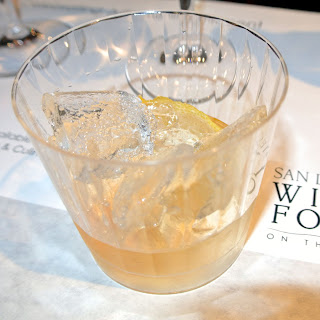 The first taste of it I didn't like. But it grew on me.
Next both the chefs started working on their dishes.
The class watched every move and anticipated tasting their yummy twist on Chicken Liver Mousse, Duck a L'Orange, and Apple Charlotte. 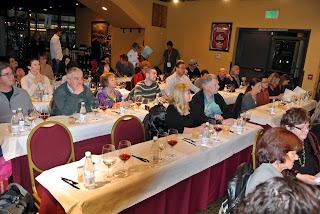 The first finished was the Chicken Liver Mousse, prepared by Chef Katsuya . 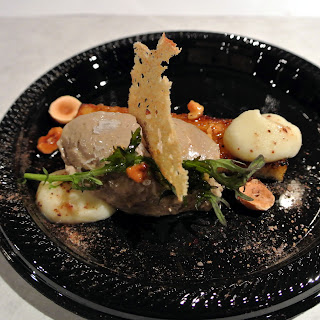 I was so worried to try this. I thought for sure I would think it was nasty. I loved it! I was shocked! It was so well balanced with both sweet and savory. I can't believe I am saying this, but I will be making this one.
Next up was Duck a l'Orange prepared by Chef RJ Cooper. 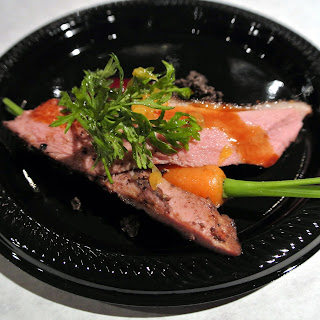 Again, I was skeptical. I had not previously had duck prepared in a way that I liked it. Once again I was wrong and I really really enjoyed this dish! His presentation was cool because he put dry ice around it and everyone clapped as the fog filled the counter. 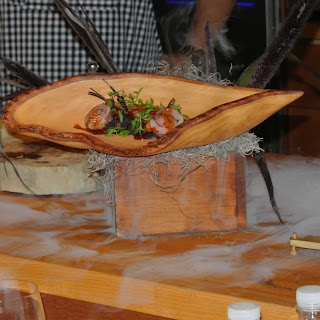 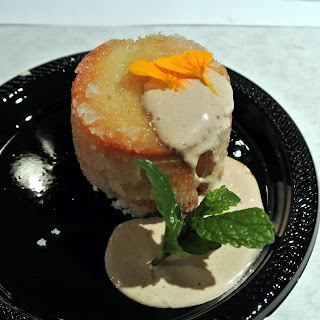 I could eat this all day long. He showed us an easy way to make apple puree in 3 minutes. I will be sharing that recipe with you guys soon. 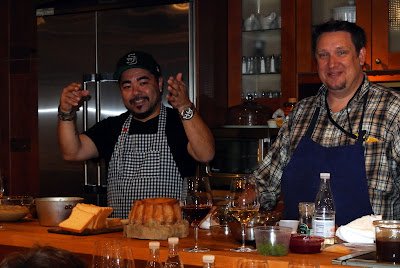 This really was a fabulous event. Next year I am going to attend as many of these cooking classes I can. The wealth of knowledge these seasoned chefs bring makes me thirsty for more.
Today is the grand tasting on the bay! I hope to see some of you there!