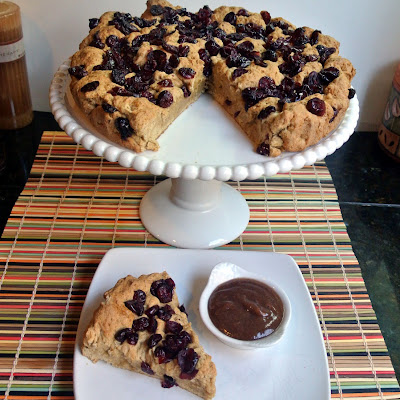 Thanksgiving might be over, but pumpkins are still in full swing at this house. So are cranberries. I love to serve a good scone in the morning during the holiday season. I served these with my homemade apple butter and they were a big hit!
Stay tuned after the recipe to win this beautiful dessert pedestal from Rosanna! 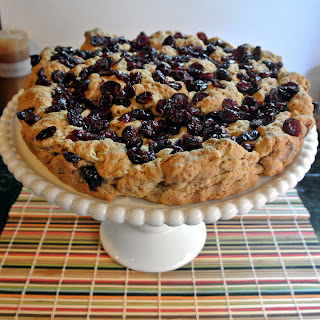 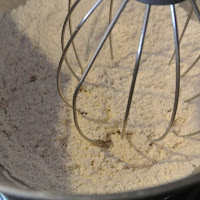 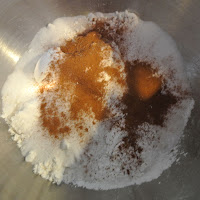 Pre-heat your oven to 400 degrees.
In a large mixing bowl, sift together the flour, sugar, baking powder, baking soda, salt, and cinnamon. 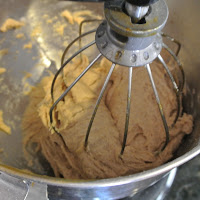 Add the butter and cut in until the butter is in small pieces. Create a well in the dry ingredients and put the Pumpkin Spice Concentrate, egg, and extract in the middle. Gently stir until combined.
Place dough onto a prepared pan. Top with Craisins.
Pat the dough into an 8 inch circle. 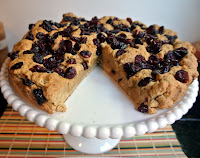 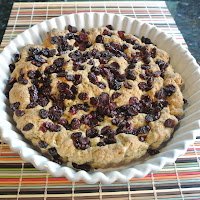 Bake at 400 degrees for 25 minutes. Remove from the oven and let cool. Cut into triangles and serve. It goes great with Apple Butter.

Now if the recipe wasn't good enough. I have something even better!

Win this beautiful dessert pedestal from Rosanna! Have you heard of Rosanna?
"Rosanna Bowles is a Northwest educated, self-made entrepreneur. She started her successful tableware company out of her Seattle home in 1982. Nearly three decades and millions of dishes later, Rosanna Inc. has grown exponentially. Rosanna has emerged as a trendsetter in the homewares industry and established her product as an internationally acclaimed brand. Rosanna is a star presence in design circle, highly sought after for her expertise on mindful, gracious living."

This Giveaway is open to readers 18 years or older with U.S. or Canada shipping addresses only. No purchase necessary to enter or win. Winners are generated via the random number generator software program. Winners must respond within 5 days or the prize will be forfeited.
You can enter 3 different ways. You MUST like Rosanna on Facebook to be considered for the giveaway. The other 3 entries are optional. Do one or all, and comment, because each comment is an entry.   Please remember you have to come back and comment below because that is the way the winner is calculated through random.org.
This giveaway will run for 7 days starting Tuesday 27th ending Saturday December 4th. Winner to be announced December 5th. Stay tuned! I have a lot of great giveaways coming your way!