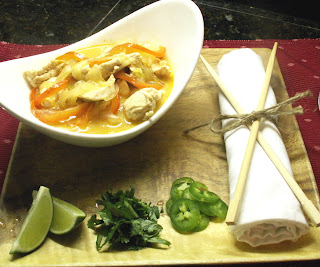 Funny fact about us... We have a scrub brush named Gertrude. It is just a thing my daughter and I do. We name the scrub brush. Gertrude is a brunette and has been a very faithful servant. But sad to say, her life has come to an end. I have glued her back together and even drew her face back on a few times. I held on to her longer than I should have, and Taylor and I discussed how it was time to have a proper burial for her, but I just had a hard time replacing her. Alas, her time definitely is over and I finally bit the bullet... Meet Marilyn: 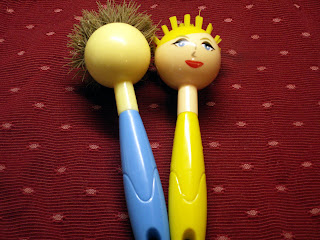 Marilyn is the cute Blondie on the right. Gertrude is the old haggard one on the left. She used to look a lot like Marilyn. All good things come to an end. Goodbye Gertrude!

I had an amazing day in the kitchen. My husband is a huge red curry fan. It is probably one of the only things besides sushi that he eats outside the home. Tonight I wanted him to come home to one of his favorite meals. So I began the journey... and it was loved by ALL of us. I am adding it to the rotation.
Thai Red Curry Chicken
1 tablespoon canola oil
1 sweet onion, thinly sliced
2 cloves garlic, minced
2 tablespoons red curry paste
6 cups chicken broth
1 15-ounce can coconut milk
1 tablespoon fish sauce
1 red bell pepper, thinly sliced
2 jalapeno peppers, thinly sliced, divided
14 ounces thin rice noodles
one pound, boneless chicken breasts very thinly sliced diagonally, I always call it a Thai cut.
lime wedges
1 cup roughly chopped fresh cilantro 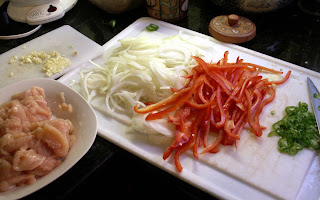 Put on the stove a large pot (that has a lid for later use) with the canola oil on medium-high heat. Add the onion slices 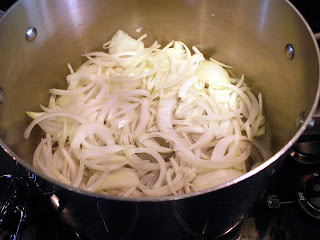 cook them until they are soft and lightly browned. 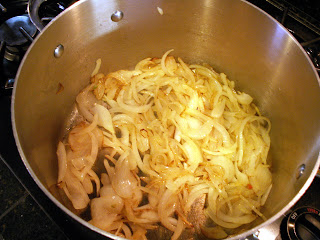 Mince the garlic into the pot and I also add the curry paste. Stir everything together. 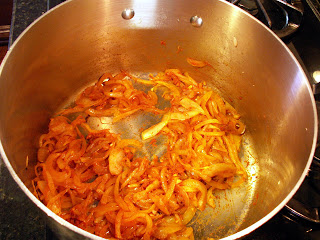 After a few minutes, add the chicken broth, coconut milk, and fish sauce. Cover with the lid and bring everything to a boil.
Add water to another pot and bring to a boil. Remove from heat and add rice noodles to hot water and let stand 7 minutes.
While noodles are cooking in the other pot...once the soup is boiling, Add the bell pepper and one jalapeno pepper and lower to a simmer. 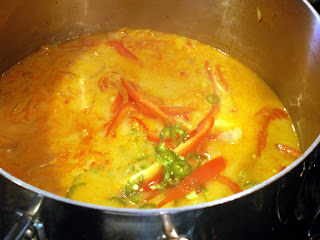 Add chicken and let the soup simmer, uncovered, for 5 minutes. It only takes a little bit of time because the chicken is extremely thinly cut. If you do not cut your chicken thin, this may take longer.
Strain Noodles and add them in individual servings to bowls. 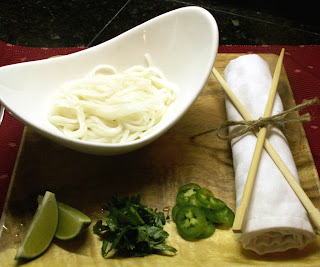 Pour the chicken and broth mixture over the noodles. 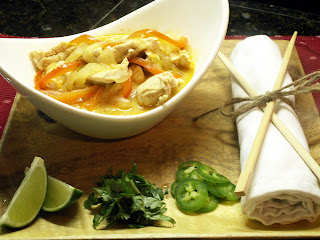 Encourage your dinner guests to squeeze in the lime juice. 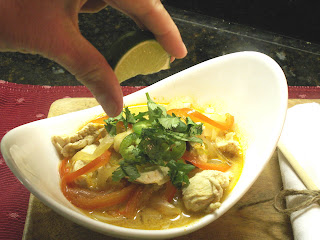 add cilantro and peppers according to preference and eat! 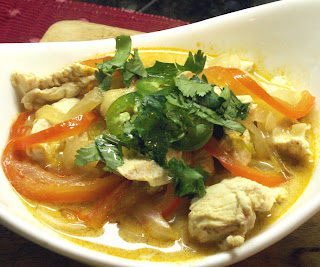